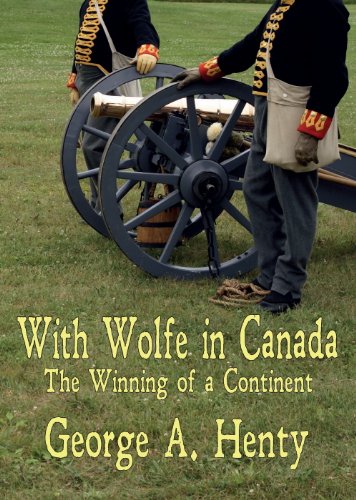 WITH WOLFE IN CANADA: The Winning of a Continent [Annotated] (The Henty History Series)

With 58 pages of additional articles, references, and bibliographies of recommended reading.

In 1754, a young Virginian named George Washington leads an expedition into the Ohio Territory that triggers the French and Indian War in North America. Colonial and English armies are continually battling French and Indian forces for control of the Ohio region, but are suffering defeat after defeat. In England, however, William Pitt is appointed Secretary of State. One of his highest priorities is to gain control of the tedious war, so he appoints General James Wolfe, a proven veteran with tactical and strategic abilities, to command in America.

In With Wolfe in Canada, James Walsham is left to his own devices after the death of his father, and winds up getting involved with gangs and street thugs. He joins the British Army and soon finds himself climbing the cliffs below Quebec, where the British, under Wolfe, meet the French Army of General Montcalm on the Plains of Abraham. This is where the decisive battle for the North American continent is fought, and Walsham is in the middle of it all. The British achieve a great victory at Quebec and double the size of their empire in the north; yet, within a few years, that victory leads to a new war with the colonists—a little conflict called the American Revolution.