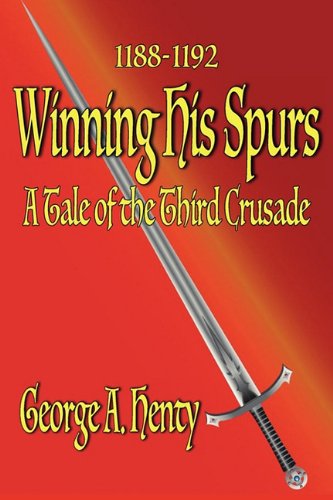 Winning His Spurs: A Tale of the Third Crusade

With 41 pages of additional articles, references, and bibliographies of recommended reading. The Third Crusade was both a success and a failure. The armies of both Egypt and Syria had become united under the Muslim leader, Saladin. As a result, most of the Christian states in the Middle East, along with Jerusalem itself, had been recaptured. This led to the Third Crusade led by Phillip II of France, and Richard I (the Lionhearted) of England. After capturing the city of Acre in 1191, the European allies fell to squabbling amongst themselves and Phillip left Richard to carry on. Although Saladin never defeated in battle, he agreed to a peace treaty in which Jerusalem would remain under Muslim control, but allowed Christian pilgrims the right to visit the city. Because Richard failed to capture Jerusalem outright, a Fourth Crusade was called six years later. The hero of Winning His Spurs, Cuthbert, joins Richard I's army as they make their way across Europe to fight the Saracens in the Holy Land. With bow and battle-ax he is in the thick of numerous fights until, in Palestine, a mace blow to the head fells him. When he regains consciousness, he is a prisoner. From there, he has the nearly impossible task of staging an escape, and somehow making it out of Palestine, across Europe, and home. The Henty History Series - Learning History Through Fiction The Henty series is a unique way of learning about history. It consists of over 80 novels, each written by George A. Henty, and each featuring a significant historical person, period or event. * Perfect for busy people who have never lost their desire to learn. * An ideal way for homeschool students to learn history. * Organized by time period. * With additional nonfiction articles and a bibliography of recommended reading. "If you want to fall in love with history, there is simply no better way to do it than this."
Related Posts
Share This