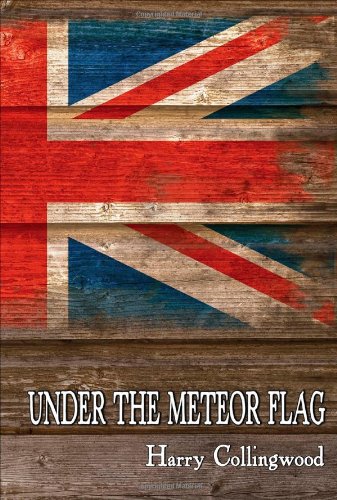 Under the Meteor Flag: Log of a Midshipman During the Napoleonic Wars

William Joseph Cosens Lancaster was the son of a Royal Navy captain and educated at the Naval College, Greenwhich. Even though he had been at sea since the age of 15, he had to abandon a career in the Royal Navy because of severe myopia which kept him from clearly seeing anything more than a few hundred yards away. Undaunted, he became a marine engineer specializing in harbor design. He also became one of the most prolific writers of nautical fiction of his day. Between 1886 and 1913 he wrote 23 nautically-related novels under the pseudonym of "Harry Collingwood"-a name he derived from his hero Admiral Cuthbert Collingwood, Nelson's second in command at Trafalgar. His most commercially successful book was The Pirate Island written in 1884; but Under the Meteor Flag, written the previous year, might be his most action-packed. It is the story of a young midshipman who, like many of Marryat's characters, is trying to make his way in the new and often incomprehensible world of the 18th Century Royal Navy. It is the story of the midshipman that Lancaster never was, but it is written by a man who literally spent his whole life dealing with the sea.
Related Posts
Share This