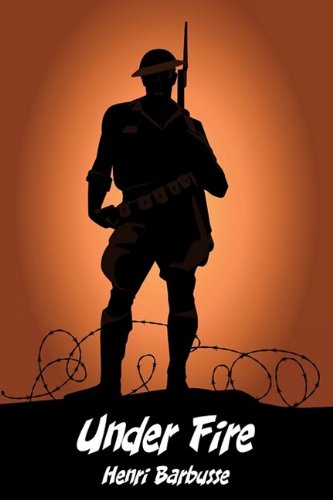 Under Fire: The Story of a Squad

Under Fire: The Story of a Squad The most powerful, brutal, and vivid novel to come out of WW-I To the men of the French Sixth Battalion, war is not about bands playing and flags waving. It is about mud, lice, and death. It is about survival under the worst possible conditions, where a wound that put you in the hospital made you a lucky man. Under Fire was one of the first novels to come out of WW-I, being published even before the war was over. It's realism and intensity set the standard for the war novels to come, including Hemingway's A Farewell to Arms, and Remarque's All Quiet on the Western Front. It's realism, however, is not manufactured. It was born out of the experiences of the author who began work on the novel literally while he was still in the trenches. The book has no plot in the traditional sense. It is a series of incidents woven together to present the reality of the war. It's power lies in the incredibly vivid pictures it presents. In 1916 it won the prestigious Goncourt Prize, given by the Académie Goncourt to the author of "the best and most imaginative prose work of the year" and is, even today, considered one of the great war novels of all time.
Related Posts
Share This