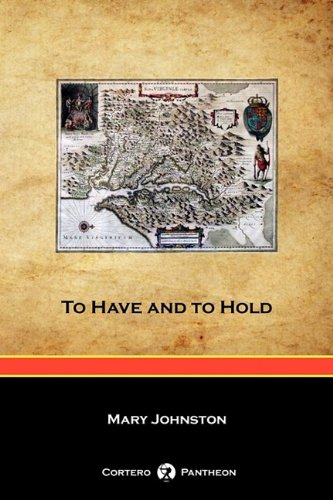 To Have and to Hold (Cortero Pantheon Edition)

To Have and to Hold introduced 20th century readers to what would become the fast-paced historical thriller of today. Released in February, 1900, it sold over 220,000 copies in just twelve weeks, and launched the career of one of the South's most talented writers, Mary Johnston. The plot is tailor-made for action. A beautiful maid-of-honor, a ward of King James I, escapes marriage to a libertine nobleman, who is the king's favorite. She flees to colonial Virginia with a cargo of brides sent out by the Virginia Company of London, and marries a rough, hard-working, settler. He turns out to be a former English soldier and a famous swordsman, who must now defend his wife against her former fiancée who has tracked her to Jamestown. From that starting point, we are treated to duels, shipwrecks, sieges, poisonings, adventures with pirates, and capture by indians-each following the other with breathtaking rapidity. To Have and to Hold was the first romance novel to go #1 on an official bestseller list. It was the inspiration for two movies and a musical drama, and was the first movie to be remade into a second version. "Daringly and dazzlingly written, full of vigorous movement; the characters are boldly outlined and the scenery is polychromatic. - Ernest A. Baker - Author - A Guide to Historical Fiction and The History of the English Novel
Related Posts
Share This