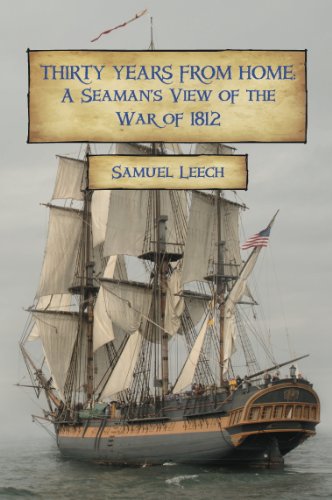 Thirty Years from Home: A Seaman’s View of the War of 1812

Suppose you had a sailor who served honorably and well in two different navies—that were on opposite sides of the same war—and then wrote a book about it?

Samuel Leech was once a young sailor in the Royal Navy. That's not terribly extraordinary, until you add…

That he served aboard the HMS Macedonian when she fought, and was captured by, the USS United States; and was made an American prisoner of war.

That he then joined the U.S. Navy and was aboard the USS Syren when she fought, and was captured by, HMS Medway; and he was made a British prisoner of war.

And finally, that he was the ONLY seamen to write an account of his experiences with both navies, on opposite sides, in the War of 1812!

But it doesn't stop there.

Leech was also an astute observer. His vivid description of the carnage aboard the Macedonian in her encounter with the United States is a classic; and his comparison of the way seamen were treated by both navies is penetrating. Indeed, those insights have become the source of many historian's views that this disparity in treatment was one of the main reasons that American ships were so successful during the War of 1812.

But above all, Leech writes with a human touch that draws you into his world. When you are finished reading, you literally feel like you were there with him and that you somehow know the man.

It is one of the most extraordinary books in all of nautical literature, now brought back into print by Fireship Press.
Related Posts
Share This