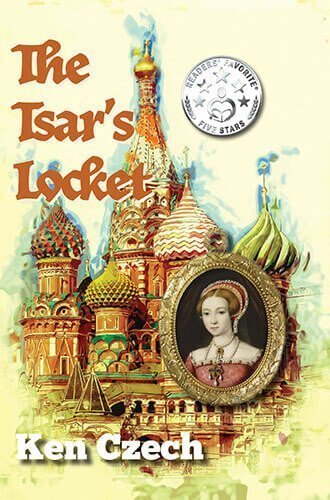 Julian Blunt, a former sea captain and a despised Catholic, is stunned when Queen Elizabeth proposes that he help carry a betrothal locket to Tsar Ivan the Terrible in Moscow. It means an alliance between England and Russia is brewing, and the queen warns that should the locket fall into the hands of the Pope or his minions, it could mean war. Julian joins the queen’s messenger, the lofty and spirited Jessandra Calcross, in a perilous voyage across the Baltic Sea and into the very heart of Russia. When a papal assassin determined to prevent the royal marriage strikes, Jess turns to Julian as the only man she can trust. Although at odds over religion and station, a slender emotional bond grows. Stalked by the relentless murderer, Julian is soon torn between abandoning his mission so he can better safeguard Jess, and fulfilling his vow to the queen. If he fails the queen he’ll never captain a ship again. But if he and Jess continue on to Moscow, they face a darker peril in the mercurial and sinister Tsar Ivan—a peril that will drive courage and dawning love to the breaking point.

"Ken Czech has penned an interesting novel based on the real story of Tsar Ivan’s interest in marrying Lady Mary Hastings, including a request for her portrait. Fictional characters and events are created brilliantly to fill in the unknown details. The inclusion of romance in the plot adds to the appeal. The well-placed conflict faced by the characters holds our attention up to the ending. The details and descriptions of the difficult sea voyage and the arduous land journey through northern Russia in wintery conditions are well narrated. Historical information about the war between Russia, Poland, and other European nations and the overall political situation is built into the storyline. The vivid descriptions of the European cities, including Moscow and the Tsar’s palace, transport us to that era. An exciting and informative novel. Highly recommended." –Waheed Rabbani, Historical Novel Society
Related Posts
Share This