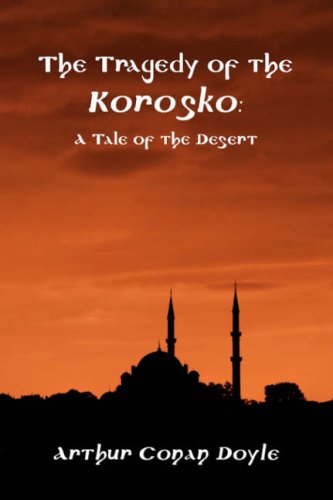 The Tragedy of the Korosko

Doyle's Riveting Psychological Thriller The Tragedy of The Korosko is the smallest of Conan Doyle's historical novels; but it is perhaps his most intense. Ten tourists from England, Ireland, America and France-six men and four women-are on a vacation trip down the Nile in 1895. Without warning they are captured by Islamic terrorists, and the possibility of rescue becomes more remote with each passing day. Their choice is a stark one: either convert to Islam and become slaves for the rest of their lives-or die. With those as the only two possibilities-with heat, thirst and brutality as their only companions-Doyle explores the kind of heroism that can be found even in an average person when pushed to his or her limit. "The fire that smoldered in his arrogant eyes shone back at him from a hundred others. Here were to be read the strength and danger of the Mahdi movement; here in these convulsed faces, in that fringe of waving arms, in these frantic, red-hot souls, who asked nothing better than a bloody death, if their own hands might be bloody when they met it." A masterful tale, told by a master story teller Arthur Conan Doyle
Related Posts
Share This