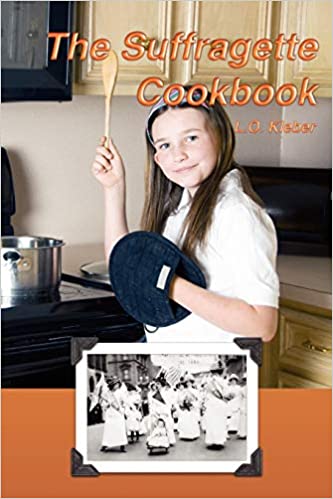 The Cookbook that Fueled a Movement-in more ways than one. To all appearances the intent of this cookbook was to raise money for the Equal Franchise Federation of Western Pennsylvania; but there was more to it than that. A lot more. In order to get the 19th (Suffrage) Amendment passed, women had to win the support of a large number of male voters, as well as the support of other women. The first goal was not easy because, among other things, men were worried that women would lose sight of their traditional roles as homemakers. And the education of their fellow women was made difficult because, in many homes, suffrage literature was simply not allowed. So what could be more innocent and less threatening then to produce a cookbook filled with homey recipes? Yet it also contained on its pages messages of equality, and notes of support for universal suffrage. There were recipes for orange marmalade, but there were also recipes for a "Pie for a Suffragist's Doubting Husband." In effect, this book, and others like it, was both an exemplary demonstration of domesticity-and a Trojan Horse. To be sure, several of these recipes might give a modern day, health conscious, nutritionist a case of the vapors. Neverthe-less, they were among the best recipes these women had; and even by today's standards, they're still delicious! From its pages you can not only generate a great meal, but you can read a slice of history while you're at it.
Related Posts
Share This