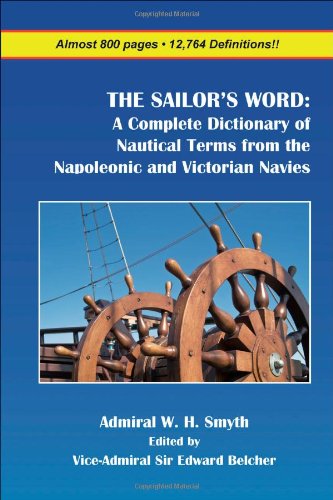 THE SAILOR'S WORD: A Complete Dictionary of Nautical Terms from the Napoleonic and Victorian Navies

Almost 800 pages . 12,764 Definitions. The Most Complete Reference of Its Kind It's one thing to compile a dictionary of nautical terms from the Age of Sail; but it's quite another when the people doing the compiling actually lived them. That is exactly the situation in The Sailor's Word. William Henry Smyth (1788-1865) was in the Royal Navy for over 25 years, rising from a ship's boy on a West India merchantman to a Royal Navy Admiral. In addition to commanding several Royal Navy ships, he became world famous as a hydrographer (some of his charts were still in use in the 1960's), and as an astronomer (he eventually became president of the Royal Astronomical Society). The last years of his life, however, were spent compiling The Sailor's Word from his vast storehouse of nautical experience; but he died before he could see it published. His family decided to go forth with the publication of his final work. Their selection of an editor couldn't have been better: Sir Edward Belcher (1799-1877). Sir Edward was a Royal Navy officer with even more experience than Smyth. In his 40 years of service he captained numerous ships and generated a well-deserved reputation as a naval surveyor. His final command was of the unsuccessful expedition to find the missing and ill-fated explorer, Sir John Franklin. A cousin of Frederick Marryat, it can be plausibly argued that his novel, Horatio Howard Brenton, was the real model for C.S. Forester's Horatio Hornblower. If you want to understand modern nautical fiction, you have to understand the language they used and the way they actually used it-not the way you think they used it.
Related Posts
Share This