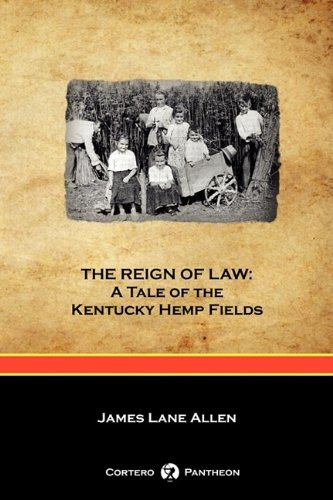 The Reign of Law: A Tale of the Kentucky Hemp Fields (Cortero Pantheon Edition)

The Reign of Law is about two revolutions, even though the plot is situated in the Kentucky hemp fields. The first revolution was the social upheaval in the South that followed the Civil War. The second was the moral and intellectual revolution that followed the great scientific discoveries of the mid-19th Century. The chief characters of the story are a young man and a young woman. As was so often the case during the reconstruction of the South, the heroine passed from the high social sphere of her birth, to the humblest and most obscure hard manual labor. The hero rose from the lowest social condition, to the highest intellectual plane, finding his development through religious and scientific thought. When they finally meet, their influences on each other provide the grist for a most engaging plot; but it doesn't stop with "boy meets girl." The involved social and political conditions, and the vast differences between the two main characters, have allowed James Allen a wide playing field for the subtle analysis of character. Fortunately, in this exquisitely delicate art-he is a master. Overlaying all this, the hero passes through a profound religious crisis, which is the "law" referred to in the title. James Lane Allen writes in a style that accurately portrays the depth and color of 19th Century Kentuckians and their surroundings. Perhaps for this reason, in 1992 he was described as "Kentucky's first important novelist."
Related Posts
Share This