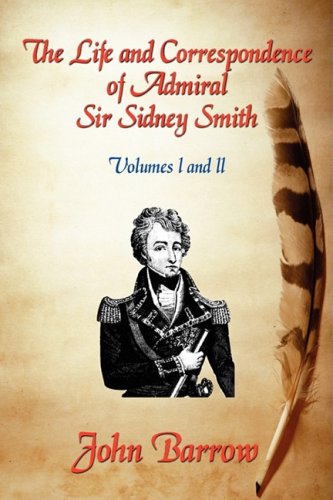 The Life and Correspondence of Admiral Sir William Sidney Smith: Vol. I and II

The Life of Britain's Most Overlooked Hero Sir Sidney Smith is perhaps the most overlooked star in the constellation of British heros. One of the reasons for this neglect is that he operated at the same time as-and was the primary rival of-Horatio Nelson. Nelson, of course, went on to immortal fame; but few people realize that Smith's accomplishments were in many ways fully the equal of Nelson's. Indeed, it can be argued that Nelson's renown was literally made possible by the exploits of Sir Sidney Smith. Barrow's life of Sir Sidney was the second volume on Smith ever compiled; but it is, by far, the most comprehensive. It is a book, however, that almost didn't get written. In 1848, Richard Bentley, a publisher, bought a collection of old manuscripts and papers and found that it contained a large quantity of material written by Sir Sidney. He called in an accomplished writer, John Barrow, to see if there was enough material to publish a biography. There wasn't. Barrow was about to give up when, by chance, he mentioned the project to his father. His father had an old acquaintance by the name of Septimius Arabin, a retired Royal Navy captain and a close friend of Sir Sidney. Barrow contacted him, and hit a gold mine. Arabin had boxes and boxes of manuscripts, letters and other documents, all given to him by Sir Sidney in his will, in case anyone should ever want to write the story of his life. He also put Barrow in contact with Smith's two brothers and other family members. The result was this book, an extraordinary account of Sidney Smith's life-as told mostly by Sir Sidney through his letters and correspondence. This book, along with Edward Howard's Memoirs of Sir Sidney Smith, form the seminal documents that have, for over 150 years, served as the factual basis for the life one of the greatest, if not the greatest, British naval hero of all time.
Related Posts
Share This