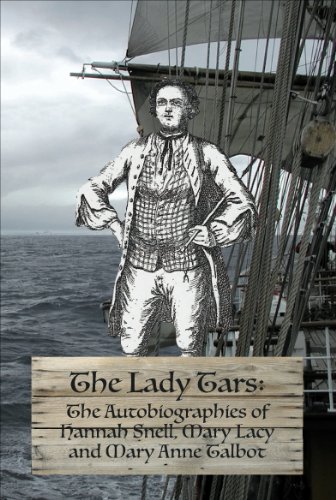 Out of Print for over 200 Years, the original text of three of the most remarkable naval biographies ever written.

We know that women served as sailors in the Royal Navy as early as 1650. Unfortunately, what little we know of these women is based largely on second- and third-hand accounts and deductions. In general, few seamen (and even fewer sea-women) knew how to write. As a result, there exists no first-hand, autobiographical, accounts—with three exceptions.

Three women—three lady tars—left memoirs of their experiences serving as men in the Royal Navy.

Hanna Snell (1723-1792) originally joined the army but deserted over a brutally unfair punishment to which she was subject. She then joined the marines and was wounded several times at the Battle of Pondicherry. Later she capitalized on the success of her autobiography by launching a stage career in which she would appear in her uniform doing military drills and singing patriotic songs.

Mary Lacy (1740-1773+) ran away from home when she was 19, and became a carpenter’s servant on several Royal Navy ships. After four years at sea she applied to be an apprentice shipwright. Seven years later, after dodging several brushes with discovery, she became the only known, fully credentialed, female shipwright of that era.

Mary Ann Talbot (1778-1808) started her career in the army disguised as a boy servant to an officer. After he was killed at the siege of Valenciennes, she deserted and was pressed into the Royal Navy. There she served as a cabin boy, and fought at at the Battle of the Glorious First of June—where she almost lost her leg from wounds.

Fireship Press is proud to make available—for the first time in one volume—the text of the original editions of all three of these astonishing autobiographies.
Related Posts
Share This