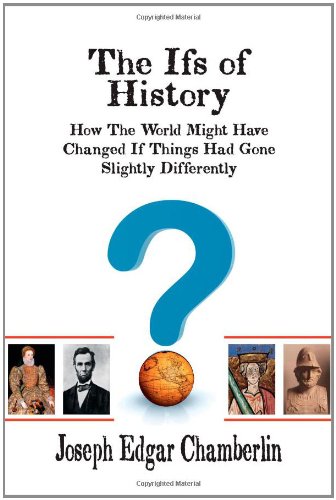 The Ifs of History: How the World Might Have Changed If Things Had Gone Slightly Differently

Columbus and Lincoln, Waterloo and Bull Run-how history would have changed if just a few things had happened differently You can look at the major events of history in one of three ways. First, you can see them as a series of mechanical causes and effects, tumbling one after the other in dizzying chains leading back forever in time. Second, you can see them as the product of pure chance, in which random uncontrolled events shape the destinies of men and nations. Or, third, you can see a Divine hand at work, intervening in human affairs with an occasional tiny nudge of events in one direction or another. Any way you look at it, it is fascinating to think about what would have happened IF one of those chains had been broken, or random chance had fallen differently, or that Divine tap had not occurred. In a series of short, easily read articles, Joseph Chamberlin takes us on a tour of some of the major people and events in history, and the minute factors that caused events to turn out as they did. What would have happened, for example, if Columbus had not changed course at the last minute and had discovered South Carolina, instead of the Caribbean islands? What would have happened if the Spanish Armada had sailed when they were supposed to, or if George Washington had joined the Royal Navy instead of the Army when he was a young man, or if Lincoln's father had moved to Mississippi instead of Illinois? If you love history, this is a book that you simply can not put down.
Related Posts
Share This