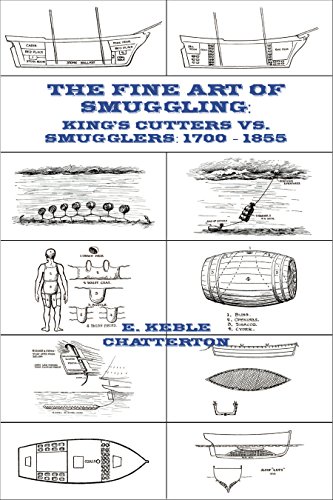 THE book on 18th Century Smuggling. Written by one of the leading authorities on nautical history. It is difficult to pick up a modern nautical adventure series without at some point coming across a plot line that deals with "The Smugglers." Whether the hero of the story is "for 'em" or "again 'em," the plot lines will be there. But who were these smugglers? How did they become so successful? How did the King's Revenue Service try to stop them; and why was it all so important? E. Keble Chatterton has written the definitive book on this period. Working from old manuscripts, logs and journals, he has reconstructed the details of how it worked-and why it worked the way it did. Sometimes the King's cutters chased the smugglers-and sometimes the smugglers (literally) chased the King's cutters. Either way, it was a wild time in Britain's nautical history. The Fine Art of Smuggling is based on Chatterton's 1912 book: King's Cutters and Smugglers: 1700-1855, and is being reissued here as a Fireship Press Contemporized Classic. With 33 Illustrations.
Related Posts
Share This