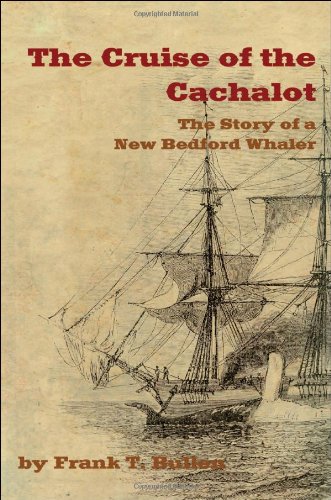 The Cruise of the Cachalot: The Story of a New Bedford Whaler

“[The Cruise of the Cachalot] is immense―there is no other word. I've never read anything that equals it in its deep-sea wonder and mystery; nor do I think that any book before has so completely covered the whole business of whale-fishing, and at the same time given such real and new sea pictures.” RUDYARD KIPLING The Cruise of the Cachalot is the story of a ship―a South Sea whaler―and the men who sailed on her. First published in 1897, it is the first whaling account written from the standpoint of an accomplished seaman, by an accomplished seaman. In 1869, at age 12, Frank Bullen went to sea. Over the years he travelled the world while serving in every capacity from ship’s boy to first mate. In 1883 he became a clerk in the relatively new British Meteorological Office where he made a sufficient name for himself to eventually become a Fellow of the Royal Geographic Society. But, his first love was always the sea; and his primary respect was always for the common seaman. As a result, he spent the last years of his life writing books and lecturing in an attempt to better the health, safety and living conditions of those men. The the level of detail presented in this book is truly astonishing. Making it all the more remarkable is that every bit of it is based on first-hand experience, and delivered with a unique and engaging mixture of literary simplicity and nautical authority. If you wish to genuinely understand the world of the 19th Century whaler, the book to read is not Moby Dick, or some other moby-clone. It is THIS one. "Mr. Bullen has a splendid subject, and be handles it with the pen of a master... The Cruise of the Cachalot is a book which cannot but fascinate all lovers of the sea, and all who can appreciate a masterly presentation of its wonder and its mystery, its terrors and its trials, its humours and its tragedies." THE LONDON TIMES
Related Posts
Share This