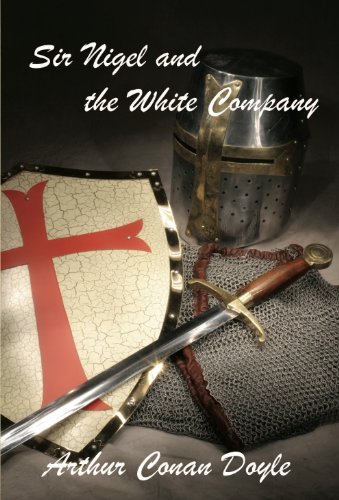 Sir Nigel and the White Company

“[These two books] made an accurate picture of that great age, and that as a single piece of work they form the most complete, satisfying and ambitious thing I have ever done." - Sir Arthur Conan Doyle

Sir Arthur Conan Doyle’s Sherlock Holmes stories are classics of western literature. But many people don’t realize that he was also among the best historical novelists of his day. Sir Nigel and the White Company combines two of his best novels into one.

Sir Nigel describes the early years of Nigel Loring during his initial service with King Edward III during the Hundred Years War. Doyle captures the period brilliantly—from the cadence and style of their speech, to unforgettable descriptions of court life, to the capture of the Castle of La Brohiniere, to a stirring account of the Battle of Poitiers. It is a classic adventure tale, full of romance, chivalry, battles, brutality, and humor as the impoverished Nigel Loring and his attendant Aylward seek their fortunes.

In The White Company, it is now 1366 and Sir Nigel is the leader of a raucous band of English bowmen known as the White Company. It’s a story of hard blows and daring feats, to be sure, but it also captures the spirit that animated the English leaders and shows the reasons why the reputation of the English bowmen was so fearsome. When Conan Doyle was once asked which novel of his was his favorite, he replied, The White Company. “I was young” he said, “and full of the first joy of life and action and I think I got some of it into my pages."

If you enjoy reading about chivalrous knights and glorious deeds, in a context of historical accuracy, this book is for you.

“Now order the ranks, and fling wide the banners, for our souls are God's, our bodies the king's, and our swords for Saint George and for England!" - The White Company
Related Posts
Share This