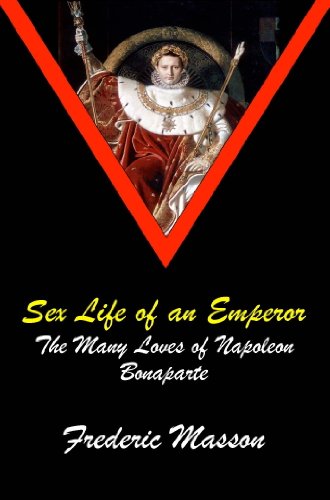 SEX LIFE OF AN EMPEROR: The Many Loves of Napoleon Bonaparte

The Women Who Conquered a Conqueror.

Napoleon Bonaparte’s adventures in the boudoir makes for fascinating reading; Masson presents his hero as a man who was by turns passionate, peremptory, magnanimous, and even playful with women. Napoleon is followed through affairs casual and intense, from his engagement to Désirée-Eugénie Clary, whom he casts off for the enchanting but spendthrift, older Josephine de Beauharnais and beyond.

Whether they sought him out for social advantage or out of admiration, Napoleon never suffered for the lack of beautiful feminine companionship, except by his own choice. One of the most striking narratives is Napoleon’s violent courting of Marie Walewska, who becomes his “Polish wife” and bears him a son out of wedlock.

The turning point in his fortunes hangs upon his desperation to have legitimate sons. When Napoleon divorces Josephine to secure a political marriage with Marie-Louise, Princess of Austria, it proves to be Bonaparte’s undoing, even as it provides the longed-for heir.

Written by a man who gained access to the most extraordinary, intimate details of Napoleon’s life, and who defends his every course of action, this book offers a distinctly French perspective of love, power, and history.
Related Posts
Share This