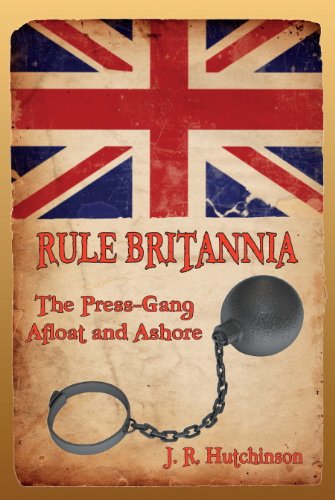 The press-gang. An unmitigated evil, or the savior of a nation? You decide.

Impressment was nothing new for the Royal Navy. It had been used as early as 1664 as a way of obtaining crews for warships. In many respects, impressment was inevitable. The number of trained sailors was finite, and had to be shared across both military and merchant ships. But, where the impact of an undermanned merchant fleet could be inconvenient, an undermanned navy could be disastrous. Britain was an island nation and depended on it’s fleet to protect it.

J. R. Hutchinson takes us on a tour of the “press-gang,” the vehicle by which “eligible men of seafaring habits” were gathered into the Royal Navy. We learn, among other things, how the press-gang began, how it worked, how it was evaded, and how it was ended. While the argument can be made that the fate of the pressed man was certainly no worse, and in many ways much better, than his cousin on land; Hutchinson takes the opposite view—that it was an unmitigated evil.

Whether Hutchinson is right, or guilty of analyzing 18th Century history with 20th Century standards, is for you to decide.
Related Posts
Share This