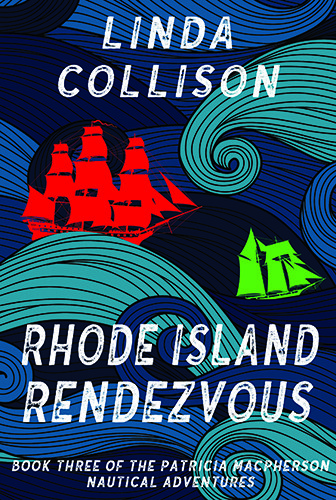 Patrick MacPherson is not the man she claims to be… Newport Rhode Island: 1765 The Seven Years War is over but unrest in the American colonies is just heating up. Maintaining her disguise as a young man, Patricia is finding success as Patrick MacPherson. Formerly a surgeon’s mate in His Majesty’s Navy, Patrick has lately been employed aboard the colonial merchant schooner Andromeda, smuggling foreign molasses into Rhode Island. Late October, amidst riots against the newly imposed Stamp Act, she leaves Newport bound for the West Indies on her first run as Andromeda’s master. In Havana, a chance meeting with a former enemy presents unexpected opportunities, while an encounter with a British frigate and an old lover threatens her liberty — and her life.

“An insightful look at life at sea during the colonial era, this novel offers a combination of adventure, discovery, and intrigue.” —The BookLife Prize “Collison’s own extensive medical background, combined with her expertise as a blue-water wind-and-weather sailor, gives incredible natural authority to her writing.” —Steven E. Maffeo; A Perfect Wreck “An excellent job has been done with MacPherson… There is a well-rounded duality of gender that allows both male and female perspectives: a clever trick, and one that comes across perfectly.” —Alaric Bond; The Fighting Sail Series “Barbados Bound is a rousing and engaging tale of the almost impossible challenges facing a young woman cast adrift in 18th Century British Empire.” —Rick Spilman, The Old Salt Blog “A riveting page-turner, Rhode Island Rendezvous delights and informs, offering a fresh take on the seafaring novel.” —Joseph S. Pete, Foreword Reviews
Related Posts
Share This