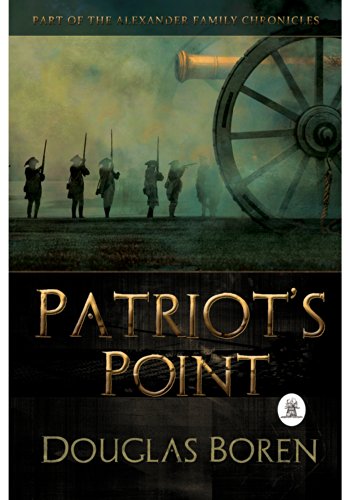 1780:  At the Battle of  Waxhaw, NC, the British Legion massacres the unresisting soldiers of of the Virginia Regiment instead of accepting their surrender.  In the aftermath, colonists—ordinary men and women,  farmers, shopkeepers, and back woodsmen—come together in secret at an abandoned Spanish mission, renaming it Patriot’s Point. There they organize themselves into a fighting force, vowing to contain the British advance at all cost until the Continental Army can retaliate. Fewer than two hundred men stand in defiance of over five thousand British soldiers: two hundred patriots, who understand that freedom is not free.
"Patriot’s Point takes the reader from the innocence of desire through the blood of need in this fast-paced historic masterpiece. It won’t take you long to realize that bravery does not only belong to the characters in Boren’s saga: you may find your own sense of liberty stands to benefit. A timely reminder, to be sure." — Dinah Roseberry, author of The Ghosts of Valley Forge and Phoenixville
Related Posts
Share This