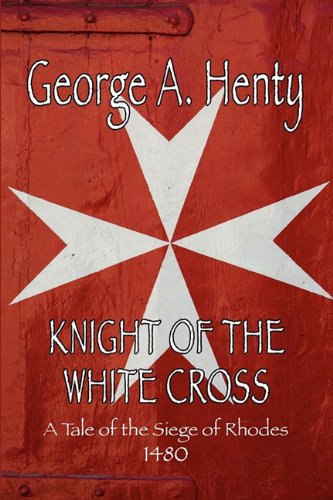 Knight of the White Cross: A Tale of the Siege of Rhodes

With 35 pages of additional articles, references, and bibliographies of recommended reading. The Knights of St. John were among the most powerful of the religious-military orders of the Middle Ages. They were originally formed to support the many thousands of Christians who were making pilgrimages to the Holy City of Jerusalem, and to protect them from Muslim attacks. Because of this mission, they were also known as the Knights Hospitaller. By today's standards, however, they were quite unusual in that they were warriors, but they were also monks-having taken vows of obedience, chastity, and poverty. Our story begins with Gervaise Tresham joining the Knights of St. John on the island of Rhodes. He soon distinguishes himself by foiling a plot, which saves a large part of Italy from the ravages of the Muslim corsairs. For this, he is knighted by the Grand Prior of the Order; but all is not well, as he develops two additional problems. First, the Hospitaller garrison at Rhodes is under attack by 160 Ottoman ships, and 70,000 fanatical Muslim troops. Second, he has fallen in love and wants to get married, which can be a bit of a problem if you are a monk and have taken vows of chastity. Henty's History Series - Learning History Through Fiction The Henty series is a unique way of learning about history. It consists of over 80 novels, each written by George A. Henty, and each featuring a significant historical person, period or event. * Perfect for busy people who have never lost their desire to learn. * An ideal way for homeschool students to learn history. * Organized by time period. * With additional nonfiction articles and a bibliography of recommended reading. "If you want to fall in love with history, there is simply no better way to do it than this."
Related Posts
Share This