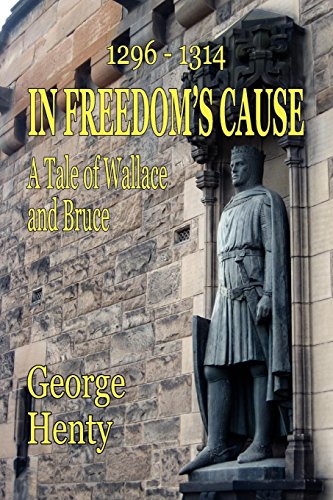 In Freedom's Cause: A Tale of Wallace and Bruce

With 67 pages of additional articles, references, and bibliographies of recommended reading. No history of Scotland can be written without consideration of William Wallace and Robert the Bruce. It was due to these two men that Scotland was able to overthrow English domination and become a free and independent people. In 1296, Edward I invaded Scotland in hopes of consolidating his claim to the Scottish throne. He defeated John Balliol at the Battle of Berwick; but his claim to the throne would not go unchallenged. In 1297, William Wallace struck back and defeated the English at Stirling Bridge; but he was in turn defeated at the Battle of Falkirk. The war was not over, however. In 1306, Robert the Bruce had himself crowned King of Scotland and renewed the war Wallace had begun. By defeating the English at the Battle of Bannockburn, he secured for Scotland a place as an independent nation. In Freedom's Cause, Henty tells the story of Scottish independence through the eyes of a young man, Archie Forbes. He forms a group of scouts for Wallace's army, participates in the victory at Stirling Bridge, and the defeat at Falkirk. After Wallace's death, he links up with Robert Bruce, and joins in the victory at Bannockburn. This is one of the best novels ever written about this period, and a must-read for anyone of Scottish ancestry, or with an interest in Scotland. The Henty History Series - Learning History Through Fiction The Henty series is a unique way of learning about history. It consists of over 80 novels, each written by George A. Henty, and each featuring a significant historical person, period or event. * Perfect for busy people who have never lost their desire to learn. * An ideal way for homeschool students to learn history. * Organized by time period. * With additional nonfiction articles and a bibliography of recommended reading. "If you want to fall in love with history, there is simply no better way to do it than this."
Related Posts
Share This