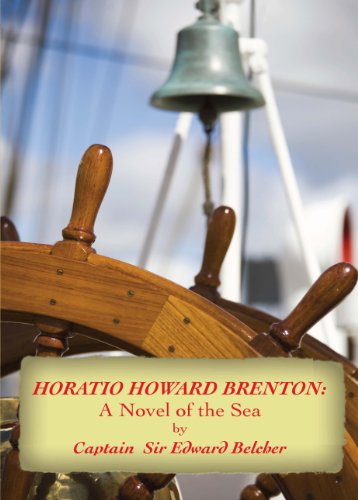 HORATIO HOWARD BRENTON: A Novel of the Sea

What were the origins of C.S. Forester's Horatio Hornblower series of novels? A good argument can be made that it all began here with Horatio Howard Brenton.

In the early 1800’s Sir Edward Belcher was a British Naval officer, surveyor and explorer of the first rank. In his 40 years of service he captained numerous ships and generated a well-deserved reputation as a skilled seaman. His final command was of the unsuccessful expedition to find the missing and ill-fated explorer, Sir John Franklin. In the process of attempting this rescue mission, however, Belcher lost four of his five ships to pack ice.

While he was acquitted of negligence in a court martial, he never again served on active duty. Instead, Belcher, a cousin of Frederick Marryat, devoted the rest of his life to writing. Included was this book, Horatio Howard Brenton, originally published in 1856 as a three volume set.

It can be plausibly argued that this novel was the real model for C.S. Forester’s character: Horatio Hornblower. Forester’s first wife, Kathleen, was a Belcher. Add to that the similarity of the story lines between Brenton and Hornblower, and the use of a common first name—and some reasonable questions might be asked.

At a minimum, it is inconceivable that Forester did not at least know about Belcher’s book. Was it the primary model for his work? You will need to read it and decide for yourself.