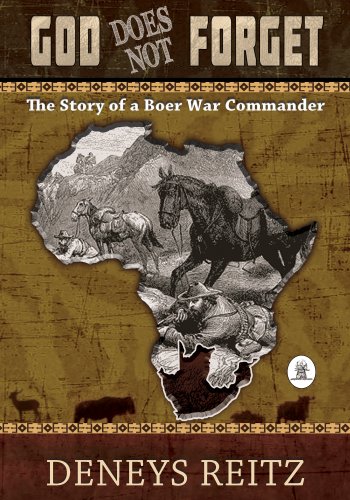 GOD DOES NOT FORGET: The Story of a Boer War Commando

“One of the greatest war books ever written.”
“A vivid, unforgettable picture of mobile guerrilla warfare.”

In 1899 a 17 year old boy by the name of Dennys Reitz volunteered to fight for his country, South Africa, against the British. He could ride and shoot with the best of them, so he was quickly assigned to a Boer Commando Unit—one of the highly mobile light cavalry units that were driving the British crazy.
Outmanned, outgunned, and under-supplied, the Boer commandos nevertheless checked the British at almost every turn. They became masters of lightning attacks, night fighting, and ambushes, only to disappear to strike again somewhere else.
Reitz was in it from beginning to end, and participated in nearly every major battle. His descriptions of war and adventure have come to be regarded as among the best in the English language.
After the fighting was over, Reitz chose to live in Madagascar rather than remain in South Africa under British rule; and it was from there that he wrote this book. But his exile did not last. His old commander talked him into returning to his homeland to help build the new dominion. To this task, he brought the courage and leadership he had learned as a commando, eventually becoming a Member of Parliament, Cabinet Minister, Deputy Prime Minister, and South African High Commissioner to London. He also fought bravely on the Western Front during WW-I—for the British.
Related Posts
Share This