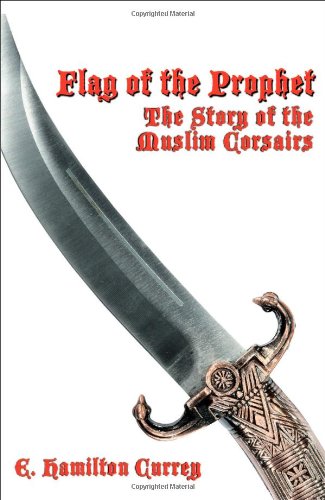 Flag of the Prophet: The Story of the Muslim Corsairs

You know about the fleets of Britain, France, Spain, and America; but did you know that some of the most formidable naval forces in history were not European at all? As the 16th Century opened, the moors had been driven out of Spain and cast onto the barren shores of north Africa. Driven by a combination of greed, desperation, and religious fanaticism, they took to the seas and formed themselves into fleets of pirates. These, however, were not the free-lance murdering marauders of a later age These were well-organized, well-led, well-disciplined, nautical shock troops. For almost 100 years they menaced the Mediterranean at will. When booty was scarce at sea, they simply went ashore and took what they wanted: gold, silver, jewels and, most of all, people―as slaves. From 1492 to 1580 they defied Charles V, Philip II, 13 consecutive Popes, and the best soldiers and sailors that Spain, Venice, Genoa, Catalonia and France could throw against them. This then is the story of the era known as “The Grand Period of the Muslim Corsairs.” More specifically, it is the story of three leaders: Kheyr-ed-Din Barbarossa, Dragut Reis, and Ali Basha. It goes without saying that they were each stained with the blood of a thousand crimes and acts of cruelty. Nevertheless, in each, there was a spark of genius that helped shape the course of history.
Related Posts
Share This