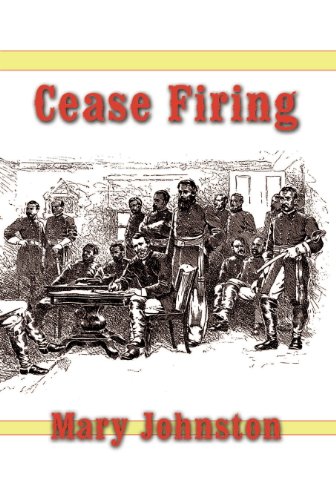 "Mary Johnston's THE LONG ROLL and CEASE FIRING are quite possibly the best Civil War novels ever written..."

Cease Firing picks up where Mary Johnston’s previous book, The Long Roll leaves off. We rejoin Richard Cleave, the Confederate artillery officer, as he fights to regain his reputation and his honor. In the process, he experiences the battles of Vicksburg, Gettysburg, Chickamauga, the Wilderness, Kennesaw Mountain and others.

Cleave can sense that the war is being lost; and he is torn between that knowledge and his sense of duty and honor. Through it all, Johnston’s attention to historical detail never falters as we are realistically propelled into Cleave’s fascinating world.

“Romances of the Civil War we have ad nauseum; but the war was no romance. In Cease Firing... we have the raw war itself.”