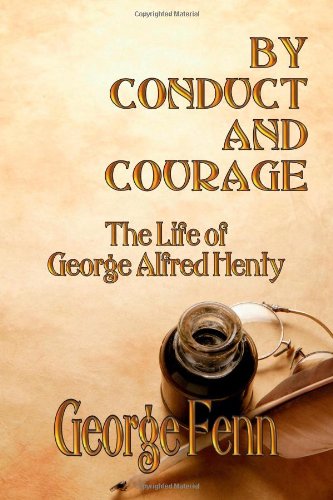 By Conduct and Courage: The Life of George Alfred Henty

Suppose you wanted to write a novel with a truly amazing main character. Let's start with a man who fought in the largest war of his day, then became a news correspondent covering major conflicts all over the world, then wrote a series of wildly successful historical novels. Let's say those novels proved to be so good they were cited as life-influencing by people as diverse as historian Arthur M. Schlesinger, Field Marshall Bernard Montgomery, Prime Minister Harold Macmillan, and business tycoon J. Paul Getty. Then, let's go further. Suppose we make him one of the best selling authors of all time, selling over 25 million copies of his books-but in time he is forgotten and becomes a literary unknown. We don't want the story to end on a down note, however, so we have him stage a comeback, with a whole new generation of readers-young and old-rediscovering the enduring value of his work. As a novel, it's probably a yarn no one would believe; yet that is precisely the story of George A. Henty. Between 1871 and 1902 George Henty wrote over 70 historical novels. They spanned eras ranging from ancient Egypt, to the early 20th Century. Interwoven within each book were themes that unabashedly promoted personal courage, self-reliance, patriotism, and moral conviction. His stories were originally targeted at teenage boys and young men, who were always his main characters. However, in recent years that target audience has reversed, and they are now being embraced by adults who hunger for historical novels that predate today's politically correct pablum. George Fenn, writing only a few years after Henty died, tells the story of an extraordinary man, living in extraordinary times, writing extraordinary books, that are strikingly relevant 100 years after they were all but forgotten.
Related Posts
Share This