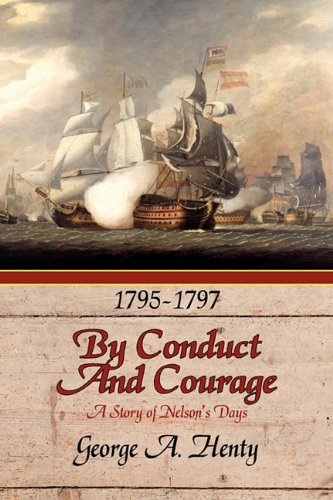 By Conduct and Courage: A Story of the Days of Nelson

With 78 pages of additional articles, references, and bibliographies of recommended reading. Great Britain is an island nation, which means it is critical that it control the waters around it in order to keep invasions at bay. In the last book published before his death, George Henty takes us to several of the key sea battles of the Napoleonic Wars-battles that kept those kinds of sea-based invasions from happening. Will Gilmore is a young man from a small village called Scarcombe, a place whose primary industries are fishing and smuggling. Rather than pursue either career, he joins the Royal Navy as a ship's boy. His rise in the navy begins rather quickly when he distinguishes himself in a battle against the French, and he is promoted to midshipman. This promotion begins a career which includes battles with pirates, being captured and escaping from the enemy no less than three times, and participation in both the Battle of Cape St. Vincent and the Battle of Camperdown. His final adventure involves him with none other than Admiral Horatio Nelson, where his resolve and persistence pay off. Henty's History Series - Learning History Through Fiction The Henty series is a unique way of learning about history. It consists of over 80 novels, each written by George A. Henty, and each featuring a significant historical person, period or event. * Perfect for busy people who have never lost their desire to learn. * An ideal way for homeschool students to learn history. * Organized by time period. * With additional nonfiction articles and a bibliography of recommended reading. "If you want to fall in love with history, there is simply no better way to do it than this."
Related Posts
Share This