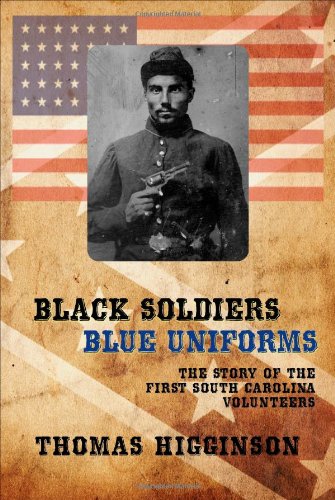 "de Fus' Souf" The Story of America's First Officially Recognized African-American Regiment. During the Civil War over 170,000 "colored" troops served in the Union Army. While there were two earlier attempts at getting an all black unit started, the first one to be officially recognized by the U.S. government was the First South Carolina Volunteers. While the unit was all black and composed of former slaves, the officers, by decree of Secretary of War Edwin Stanton, had to be all white. The first commanding officer, therefore, was Thomas Wentworth Higginson, the author of this book. Higginson in civilian life was a minister and a fiery abolitionist. As a captain in the 51st Massachusetts Infantry he was wounded and undergoing convalescence when he was offered the job of commanding officer of the newly formed First South Carolina. He jumped at the chance and this book, a diary of his observations, was the result. But in addition to simply recording his military experiences, Higginson went a step further. He was able to document the amazing dialect of his black soldiers, called Gullah, a dialect that survives even today. At night he would listen to the men sing spirituals, record the words and how they were sung, and try to find out what the songs meant. In effect, Thomas Higginson was functioning as a social anthropologist long before the field was even invented. His observations of his soldiers, his struggle with the government to bring them equity in pay and conditions, his capturing of the Gullah language, his memorializing of the spirituals and marching songs they sang-it's all here in Black Soldiers / Blue Uniforms: The Story of the First South Carolina Volunteers
Related Posts
Share This