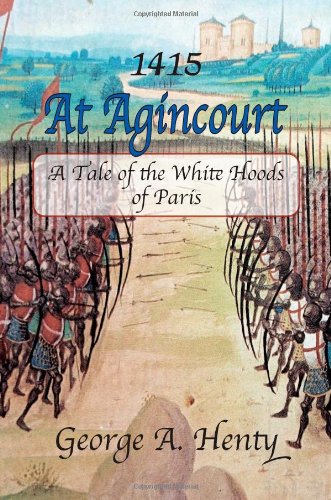 At Agincourt: A Tale of the White Hoods of Paris

With 36 pages of additional articles, references, and bibliographies of recommended reading. Agincourt is the quintessential English battle. Outnumbered English forces meet the French on the battlefield, and through courage, tenacity, (and a wicked Welsh weapon called a longbow), they win the day. While Henry V was triumphant, and was immortalized by Shakespeare for his victory, his gains were later squandered by his son, Henry VI, so ultimately not much was accomplished. In this Henty book, Guy Aylmer is an English squire and the son of a knight. He travels to Villeroy, in France, where his lord has a castle, but is swept up in it's defense when it is attacked by Orleanist forces. He winds-up as a prisoner in Paris where he and his charges are assaulted by the White Hoods-the butchers of Paris. After several adventures and escapes he later returns to France with King Henry V and fights in the Battle of Agincourt. Henty's History Series Learning History Through Fiction The Henty series is a unique way of learning about history. It consists of over 80 novels, each written by George A. Henty, and each featuring a significant historical person, period or event. * Perfect for busy people who have never lost their desire to learn. * An ideal way for homeschool students to learn history. * Organized by time period. * With additional nonfiction articles and a bibliography of recommended reading. "If you want to fall in love with history, there is simply no better way to do it than this."
Related Posts
Share This