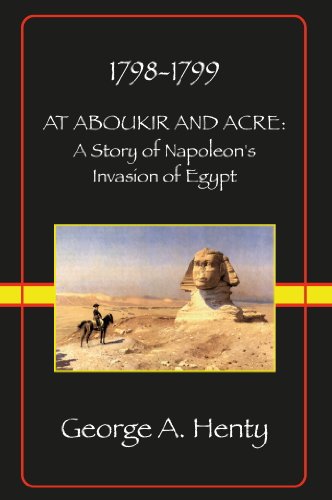 AT ABOUKIR AND ACRE: A Story of Napoleon’s Invasion of Egypt [Annotated] (Henty History Series)

With 73 pages of additional articles, references, and bibliographies of recommended reading.

In 1798, Napoleon surprised the world by invading Egypt. His goal was to conquer the eastern Mediterranean and, from there, either invade India, or invade Europe through the backdoor—from the east.

His initial battles, for example at the Pyramids, were spectacular victories. But Horatio Nelson soon destroyed the French fleet at the Battle of Aboukir Bay; and a British naval officer, Sir Sidney Smith, was the first person to defeat him on land at the Battle of Acre. As a result of those two losses, Napoleon was trapped.
At Aboukir and Acre is the story of Edgar Blagrove, a young man whose father was an English merchant in Alexandria. When Napoleon arrives, he is separated from his father, attaches himself to a Bedouin tribe, and fights the French. After witnessing the French defeat at Aboukir Bay, he joins the British Navy as a midshipman, and participates in Napoleon's defeat at Acre by serving as an interpreter to Sir Sidney Smith.