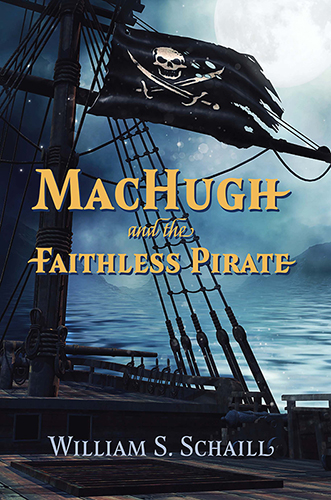 Bill was born in 1944 in Yonkers, NY. Since then, he has spent a great deal of time messing around with books and boats — big ones, little ones, here, there.

Bill has published six nautical thrillers (three under his own name and a series about sea-going terrorists and the team with the guts and wits to neutralize them) and hundreds of magazine and newspaper articles on all subjects. Bill spent his junior year of high school aboard a square-rigged school ship: majored in Spanish literature at Dartmouth College; did foreign study at the University of the Andes in Bogota, Colombia; served as a naval salvage diving officer (a ‘Bubblehead’); devoted twenty years to educational publishing; started several other business ventures of questionable success; traveled and raised two daughters (the greatest and most nerve-wracking adventure of his life).

When Bill writes, he aims for accessibility, intense but plausible action and interesting, fleshed-out characters. In order to take full advantage of rapidly advancing technology and to attract new readers, he is currently reaching out in new directions.

“A rip-snorting, swashbuckling adventure, that I was quickly caught up in. I liked the battle scenes, the storms and the part with the Maroons. The opening scene had a lot of atmosphere. I would have liked to know Kate a little better.” — Daniel Parrott – Former captain of the tall ships Pride of Baltimore II, Harvey Gamage, Bill of Rights and Tole Mour; professor of navigation at the Maine Maritime Academy; author of Tall Ships Down.

“The fast pace of this rollicking, 17th century adventure novel is set by the second sentence and continues through to the end. Rich with the sights, sounds and spirit of colonial America, the seaborne merchant trade, and scurrilous piracy.” — Nim Marsh – Editor, Points East Magazine

“One of the mostintelligent and honest sea stories I’ve read in years. Gripping and totally plausible, it illuminates what makes the varied human responses to life’s hard challenges so endlessly fascinating. This is adventure writing at its very best.” — Geoffrey Huck – Professor of Writing, York University, Ontario; yachtsman; author of the popular mystery Speechless.

“With a plot that keeps the pages turning, I was enthralled by this salty tale of sea, storms, ships and battles. Hornblower and Aubrey, here comes MacHugh. Satisfying reading for the off watch.” — Brechin Morgan – Prominent marine artist; solo circumnavigator; author of We’re All on the Journey.

“…the opening scene of this story contains spine-tingling action that makes the reader’s breath catch… MacHugh and the Faithless Pirate incorporates gripping action scenes that whisk the reader into the midst of fierce storms, pirate chases, and perilous battles.” –Cindy Vallar, Editor Pirates and Privateers

“Schaill provides no shortage of nautical detail. The author evidently knows seafaring and ships, so lovers of nautical stories may particularly savor this read. However, others who enjoy a vivid adventure, spiced with pirates, smuggling, and just a whiff of romance, will also enjoy MacHugh’s expedition. I certainly did.” –The Historical Novel Society