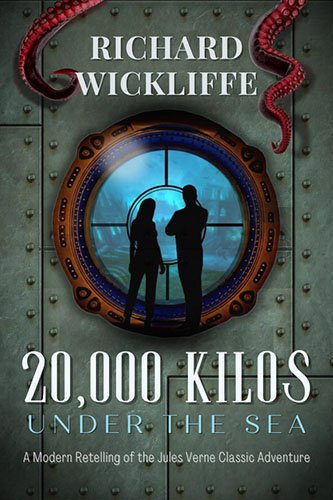 Wickliffe has managed teams of investigators for twenty years with cases ranging from crime rings to cyber fraud, human trafficking, and the Russian mafia. He’s been published in journals in the investigative field and enjoys speaking about unique crimes, including the FBI’s InfraGard Counterterrorism conferences and seminars in Las Vegas committed to accuracy in crime writing. He’s the recipient of the FBI’s Exceptional Service in the Public Interest Award.

Richard resides in South Florida with his family.

20,000 Kilos Under the Sea: A Modern Retelling of the Jules Verne Classic Adventure

A modern retelling of Jules Verne’s high-seas adventure, with an exiled captain using an illicit submarine for smuggling, discovering riches, and revenge. When a US expedition is attacked, three survivors are saved by a mysterious vessel. The enigmatic Captain Nikto elects to keep the captives alive, requiring each of their skills for his daring pursuits. As Nikto’s true motives emerge –and evidence of a rogue submarine alerts the world’s navies– the captives must work together to avoid annihilation.

A fast-paced adventure-thriller that’s described as “The classic Disney adventure meets The Hunt for Red October.”

20,000 Kilos Under the Sea by Richard Wickliffe

“A gripping adventure that merges thrills with meticulous research for a concept that’s more plausible than you would think.” –Nuclear Submariner John Jones (ret.) US Navy, US Submarine Force, STS1

Readers Favorite Book Reviews – 5-Stars – “This is a great story with stellar writing, deft plotting, and characters that leap off the pages with life… The author takes readers on an adventure in deep waters, and if he is not a skilled sailor or nautical expert, then the story is well-researched… The descriptions are terrific, filling the pages with cinematic images… There is a meld of elements of science fiction and military in this story that gives the narrative a strong appeal to a broader audience.