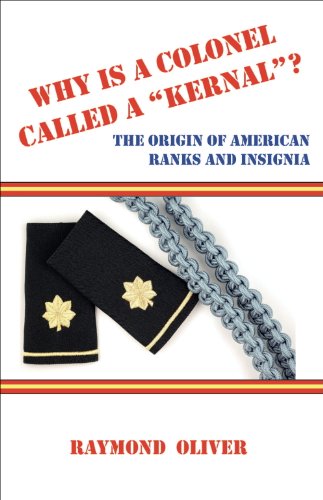 Raymond Oliver, then the Curator for the McClellan Aviation Museum (now the Aerospace Museum of California), was once asked by a colonel why her title was pronounced “kernal” and where her eagle insignia originated? That simple question began a quest to trace the development of various categories of rank. What began as a paper, however, soon developed into a booklet, which eventually wound up as this book.

WHY IS A COLONEL CALLED A “KERNAL?”

Why is Colonel pronounced “kernal”?
Why does a Lieutenant General outrank a Major General?
Why is Navy Captain a higher rank than Army-Air Force-Marine Captain?
Why do Sergeants wear chevrons?

If you are in the military, this book will give you a deeper appreciation for your rank and insignia—and you might find yourself wearing it with even more pride.

If you have not been in the service, or are a family member of one who is, this book might help to put an historical perspective on the often confusing layers of rank.