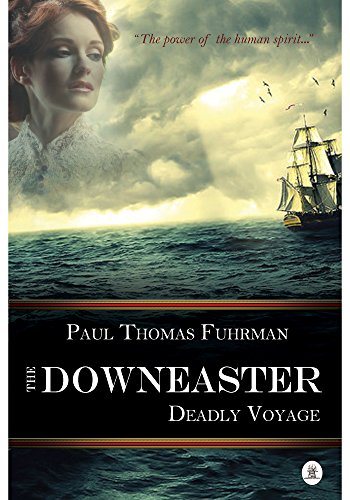 Paul Thomas Fuhrman grew up the eldest of three children in Middletown, Ohio, and graduated from Bishop Fenwick High School. He earned a bachelor’s degree in English literature from Miami University in Oxford, Ohio. After college, Fuhrman spent five years, ten months, and twenty-eight days plus a wake up of commissioned naval service. He acquired the rank of full lieutenant and his wife, Donna, his salvation. Fuhrman loved bridge watches and Combat Information Center watches as well as any deck or small boat operation. He also started crewing on sailboats in the navy. His favorite ship was the USS Tacoma PG 92.

The sea was Fuhrman’s dream from grade school on. He read about the sea, ships, and sailors in a wonderful old gothic Carnegie library on First Avenue in Middletown, Ohio.

Now ashore, arms stacked, children educated, and settled in his retirement home in Virginia, The Downeaster became an obsession of some ten years’ research and writing and has finally reached print. It is an ambition fulfilled.

Inspired by the close scrutiny of ships’ logs of the age, this historically accurate, engrossing account will likely appeal to seasoned seadogs and landlubbers alike. A clever, riveting, and multifaceted tale about sailing, so vivid that readers should taste the salt spray. –Kirkus Reviews (Starred Review and listed as one of the Best Indie Books of 2016)

Based on a historical log of a sailing trip around Cape Horn in 1872, this novel has three separate protagonists – Griffin, the ship’s captain; young Nicholas Priest, apprentice on board and sailing for the first time; and the love interest in Boston, Kayleigh. Each one tells their own story during the ship’s passage to San Francisco from Boston. Intertwined is the Irish threat of illegal gun-running. As the story moves toward its climax, the excitement intensifies on board the Providence. A highly recommended maritime tale with interesting characters; a real pleasure to read. –Historical Novel Society

“Fuhrman has delivered a Gilded Age adventure on the high seas certain to please fans of Patrick O’Brien and Joseph Conrad. Told through the eyes of a clipper ship captain, a teenage apprentice, and a spinster nurse with a secret, the story travels from the waterfront taverns and brothels of New England to the saloons and tattoo parlors of San Francisco via a harrowing voyage around Cape Horn.” —Mary Miley; author of The Impersonator [2013], winner of the national Mystery Writers of America award for the Best First Crime Novel