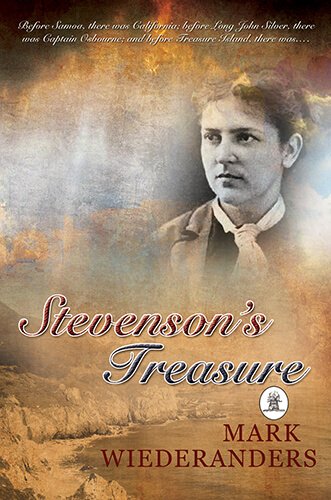 Mark Wiederanders was born in San Francisco, a city where part of his novel, Stevenson’s Treasure,  is set.  As a boy he loved stories told by his Texas grandmother about the Civil War and the Comanches, and he devoured adventure classics like Treasure Island.  In college, he majored in psychology and earned a Ph.D. from the University of Colorado.  Settling with his wife near Sacramento, Mark studied programs for delinquents and the criminally insane for the California state government, a career he considers a fitting background for a novelist!

In fiction, he writes about the private lives of famous authors.  His screenplay about William Shakespeare’s family, “Taming Judith” was a finalist in the Academy of Motion Pictures’ annual screenwriting competition and was optioned by a film company.  The idea for Stevenson’s Treasure hatched during a visit to Carmel when Mark learned that Robert Louis Stevenson suffered a near-fatal collapse in 1879 while hiking nearby. Mark explored RLS sites in Monterey, San Francisco, and Calistoga, just a few hours’ drive from home.  For authenticity he followed Stevenson’s footsteps to Europe, lodging at the Stevenson home in Edinburgh followed by a week in the Highlands cottage where RLS wrote Treasure Island.

“I write about the private lives and loves of famous authors of the past.  My favorites are those who did not claim to have figured out the world but could laugh at it — and at themselves. “

“Stevenson’s Treasure is an exhilarating ride through the Golden West as we follow Robert Louis Stevenson from France and Scotland to Monterey, California in search of love and inspiration.” – Mary Burns, author of Portraits of an Artist: a novel about John Singer Sargent.

“Drawing on prime sources, Wiederanders’ debut novel captures both the depth and charm of one of the Belle Epoch’s most unique couples; an absolutely sparkling read.” – Persia Woolley, author of The Guinevere Trilogy.

“A great and unexpected love story, beautifully and compellingly told.” – Sands Hall, author of Catching Heaven and Tools of the Writer’s Craft.

“With intricately-rendered characters, rich international historical settings, and a warm humor simmering throughout its pages, Stevenson’s Treasure reminds us that while pirates, buried treasure, and split personalities can captivate, there is no adventure quite like the deep longing of the human heart.” – Kim Culbertson, Northern California Book Award Winner for Instructions for a Broken Heart.