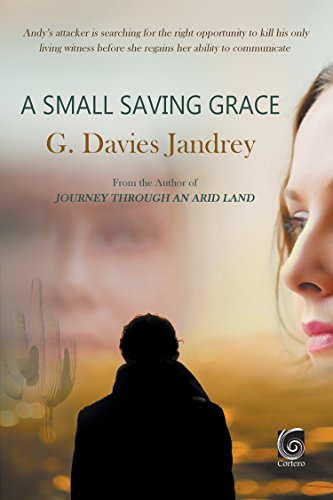 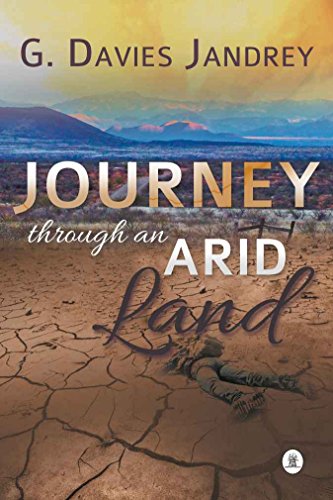 Journey Through an Arid Land2 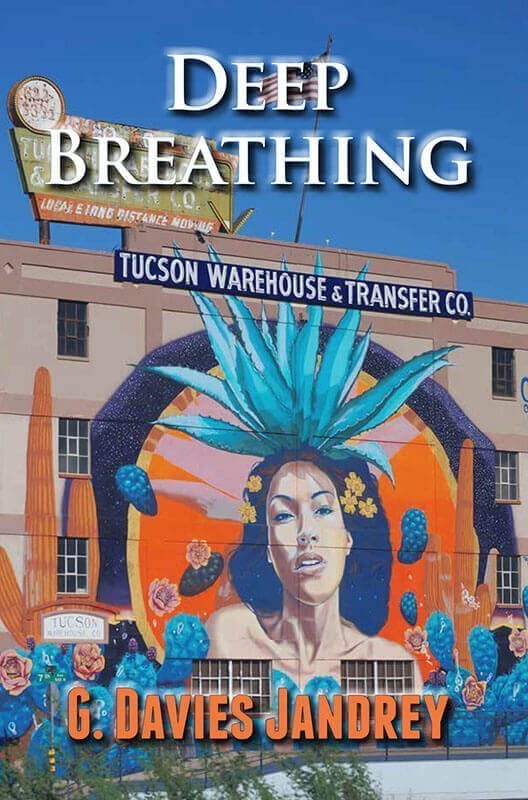 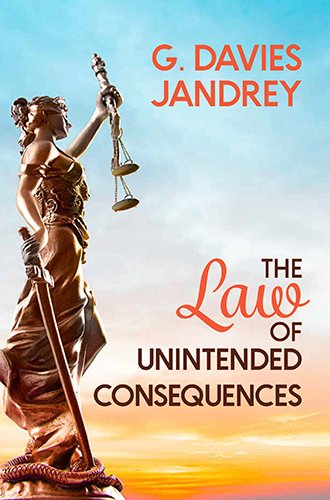 The Law of Unintended Consequences4

G. Davies Jandrey (her friends call her Gayle) is a writer of fiction and a poet. A retired educator, she has lived in Tucson for more than thirty years.

For five seasons she worked as a fire look-out in the Saguaro National Park and Chiricahua National Monument.  It was in these “sky islands” that she first learned to love the richness and diversity of southern Arizona. This double life, one spent teaching teens, the other focused on natural history, informs both her poetry and prose and provides the reader with an experience as complex and rewarding as the environments in which they incubated.

She makes her home with her husband, Fritz, in the desert outskirts of Tucson, Arizona. When she’s not writing, she gardens.

The Law of Unintended Consequences

It’s Tucson, it’s summer, and it is stinking hot.

Sturdy, stalwart Detective Marie Stransky has returned to work after the birth of her fifth baby, another girl, to find that “he’s back.”

Called to Santa Rita Park, a gathering place for the homeless and addicted, Marie studies the strangled body of a young woman. The cigarette burn on her right wrist pegs her as a victim of a stalker that has already killed two homeless women. Then there is the young Mexican woman found shot in a wash. Homicide department head, Lieutenant Carl Lindgrin, a man Marie loves to hate, dismisses the murder as gang related, but the tattoo of a unicorn on the girl’s shoulder visible in the autopsy photo gives Marie pause. What self-respecting gangbanger has a tattoo of a unicorn? And the bodies pile up.

The Law of Unintended Consequences is filled with Gayle Jandrey’s usual humor, dark and otherwise, typical array of quirky characters. All are woven through this tight, suspenseful police procedural-come-domestic melodrama like threads of bright yarn, that when pulled together make a whole cloth.

Praise for The Law of Unintended Consequences

“Jandrey’s realistic portrayal of the disenfranchised is one of resolve and empowerment, rather than one of despair or hopelessness or misplaced sympathy. She is a master of hitting characterization dead-on. The Law of Unintended Consequences is a fast read and thought provoking on many levels.” —Debra (eliotseats.com, a book review blog with a culinary twist.)

“Long-time Tucsonan G. Davies (Gayle) Jandrey clearly knows her way around the Old Pueblo. She displays this easy familiarity in her latest novel, set on the mean streets of Tucson and featuring a vividly rendered cast of characters.

Central to the drama is Tucson Police Department Det. Marie Stransky, who suspects a serial killer is behind a rash of murders in Santa Rita Park, a gathering place for the homeless. Having recently given birth to her fifth daughter, Stransky juggles her demanding job and her chaotic home life. It’s an uphill battle, what with her sadistic boss, her husband’s cooling affections, and the digital breast milk pump she wears under her uniform that hums loudly at inopportune times. She demands a lot of herself and makes self-defeating deals with God, but it all underscores her essential humanity; she’s a thoroughly realized and engaging character. Also notable are a trio of homeless women — Jandrey’s own version of ‘The Weird Sisters’ — who are portrayed as real people with feelings, coping mechanisms and survival skills, rather than just symbols of society’s shortcomings; they round out a very authentic and satisfying read.

Jandrey, a retired educator, writes both prose and poetry. She is a coach at Literacy Connects’ Reading Seed program and a volunteer at Sister José Women’s Center. This is her sixth book.” –Helene Woodhams, AZ Daily Star

Abby Bannister, the CEO and founder Gimps Serving Gimps, is being interviewed for a spot on the local news. A major gimp herself, she is a champion for the rights and independence of all people faced with physical, mental and emotional challenges. Once aired, the interview draws the attention of three people. The first is her best friend, a gay gimp looking for love in all the wrong places. The second is Abby’s long-lost cousin, Fey. Homeless, she has an ax to grind and sees Abby as the perfect grindstone. The third is a self-declared angel of mercy who believes Abby is in need of his special services. As Abby whizzes around Tucson, Arizona in her supped-up electric wheelchair, she is oblivious to the grave danger she is in.

Davies Jandrey’s evocative prose, great dialog and stinging humor, balances darkness with wisdom, hope and humanity. The wheelchair-bound, homeless, the reject and the refugee… all are given authentic voices and draw the reader in to that haunting human border between loving and being loved.

“Looming over the action in G. Davies Jandrey’s latest Tucson-set novel is the mural on the Tucson Warehouse and Transfer building on East Sixth Street. Against a cactus background, a sultry dark-haired beauty gazes out, her heavy-lidded eyes and parted lips denoting either sensuality or disdain, but not compassion. The mural shows up throughout the book, so it’s not hard to see it resonating symbolically — a higher power, perhaps, imperiously indifferent to the plights of those below. And the characters in Deep Breathing have more than their share of plights

Point-of-view character Abby Bannister, a wheelchair user with a twisted spine, is CEO of a nonprofit (Gimps Serving Gimps) that assists the disabled. Her life-long friend Robert — gay, stricken with a neurological disease — also uses a wheelchair. When Abby gives a television interview featuring Gimps Serving Gimps, she captures the attention of two more damaged individuals: her long-lost Cousin Fey, homeless and drug-addicted; and an unnamed self-appointed Angel of Death for the disabled. As Abby and Robert search for suitable romantic relationships, Fey struggles to rehabilitate herself to regain the custody of her young son, and “gimps” (Abby’s word) show up dead, the “Angel of Death” trains his focus on Abby.

Jandrey makes good use of the Fourth Avenue/ Sixth Street neighborhood for this novel. Its sidewalks, access to public transportation, and modest housing lend credibility and vulnerability to Abby’s situation. She convincingly portrays the mechanics of homelessness — from shelter rules and the protocol at the blood bank, to tent city etiquette — and creates effective suspense. Most successful, however, in Deep Breathing is Jandrey’s depiction of the physically disabled not as victims, but as independent agents of their own destinies. (God, by the way, doesn’t come off so well in this novel. It’s the “voice” of God that inspires the murderer.) Abby might as well pray to the indifferent warehouse mural lady for all the good prayer would do her. She’s heroic on her own.

Jandrey’s depiction of society’s marginalized continues to be sympathetic and informed. Her prose is increasingly nuanced. This reader, for one, would welcome more Abby & Co.” — Christine Wald-Hopkins, AZ Daily Star

“The difference between a flower and a weed is perception, as Abby learns from the tag on her bag of Karma tea. The realities of handicap, loneliness, homelessness and betrayal are beautifully balanced between well-researched detail and perceptive points of view, all hauntingly told in a story as agile and gripping as a pole dancer caught between delight in her body and the need for cash. By turns scary, sad, glorious, wise and forgiving, Deep Breathing offers wisdom to endure, mercy to change our point of view, and hope to believe in karma, God, or fate’s generosity. I’ll never look at a handicapped or homeless woman the same way after reading Deep Breathing. This novel is both bleak and totally beautiful, from beginning to its wondrously satisfying end.” –Sheila Deeth, author of Divide by Zero, Infinite Sums, and her latest Subtraction.

Praise for A Small Saving Grace

“G. Davies Jandrey’s, A Small Saving Grace, tackles a family in crisis with brutal honesty and emotional depth. Peppered with quirky humor and a gallery of characters you won’t soon forget, Jandrey dishes up a meaty stew.” —Gerry Hernbrode, author of Provincial Justice

Praise for Journey Through an Aird Land

“Gayle Jandrey has created an enthralling human drama set within the complex and dynamic world of today’s Mexican–American border region. Living within this turbulent setting is Wiona, a tough independent rancher competing in a strictly male profession, and Stokey, a veteran Border Patrol Agent burdened with family issues as he patrols a Darwinian landscape of desperate migrant travelers seeking a better life and the malevolent human coyotes that exploit them like some type of cash commodity.  Jandrey’s book gives an accurate portrayal of the danger, fear, desperation, and sometimes hope that is played out on our busiest border on a daily basis.  I found it a good read and a difficult book to put down.” —Cameron Hintzen,  Assistant Chief Patrol Agent U.S. Border Patrol (retired)

“Jandrey tackles the border drama with brutal honesty, dishing up a meaty stew of characters – some you’ll love to hate, some you’ll hate to love.” —Gerry Hernbrode, author of Provincial Justice