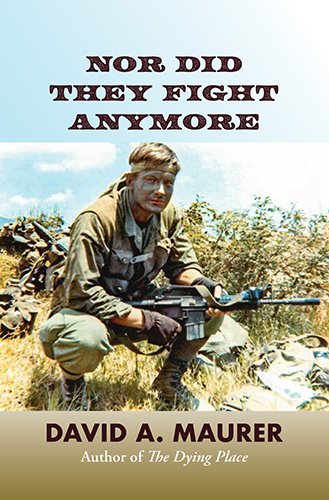 Maurer participated in several battles including the Battle of the Ia Drang Valley in November 1965, and Operation Masher/White Wing near Bong Son in 1966.

During the next year and a half Maurer was assigned to MACV-SOG and served as a reconnaissance team leader at Command and Control North outside Da Nang. His job was to lead a team of Chinese Nung and Vietnamese mercenaries on missions into Laos and North Vietnam. Among the decorations earned were two Bronze Stars, Army Commendation Medal with V, a Purple Heart, two air medals and Combat Infantry Badge.

Dave Maurer’s first book, The Dying Place, was published by Dell Publishing in 1986. It was later published by Real War Stories. Maurer worked for 30 years as the senior feature story writer for The Daily Progress newspaper in Charlottesville, Virginia, until his retirement in 2017. He is 74.

Nor Did They Fight Anymore

An enduring dichotomy of war is that even as it evolves, its savage heart remains unchanged. For more than two decades Green Beret combat veteran, David A. Maurer, delved into the Civil War in order to compare his experiences in Southeast Asia with those of his great-granduncle, Jacob Shriver, who fought for the Union during the War of Rebellion.

At times their two paths nearly merge when shared circumstances clear the blur of history. The rush of gratitude felt when sideling up to a campfire on a wet, cold night does not change. As this book reveals, just as unchangeable is the core of war that combat veterans see

Praise for Nor Did They Fight Anymore

“Two men separated by a century, united by blood learn the true cost of war, a cost not dimmed by time. I hope this breakthrough book will steer some military writers toward regarding the inner and outer effects of war on combatants.” —Rita Mae Brown, best-selling author.

“It takes one to know one. Only another combat veteran can fully understand the experience, sometimes the horror and sometimes humor, sometimes both simultaneously. Dave Maurer feels into the Civil War experience of his ancestor and puts the reader there in a way only a very talented writer-warrior can.” —Jim Morris, best-selling author of War Story, and recent book, The Dreaming Circus